THE HOUSE OF PUZZLES by Richard Newsome 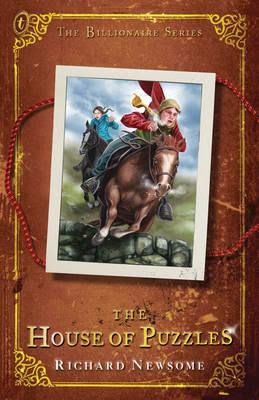 What would you do if your great aunt suddenly died in London and left her 30 billion dollars to you? Just imagine – it all was to go to you. Surely that much money would shield you from any world problems: right? Wrong.

But this is exactly what happened to Newsome’s main character, twelve year old Gerald Wilkins in The Billionaire’s Curse. Gerald should not have had any worries for the rest of his life. However there is a catch- Gerald’s Aunt Gertrude also left a secret letter that instructed Gerald to find her killer and see to it they were punished. One other problem- whoever killed Aunt Gertrude is now chasing Gerald.

The Billionaire’s Curse is the first book in Newsome’s Billionaire Series. It won the inaugural Text Prize for YA and children’s writing in 2008. I very much enjoyed the quirky characters and the action-packed plot.

In August 2014 The House of Puzzles was launched. This is the fifth book in Newsome’s very popular Billionaire series. Once again I was swept up in the twists and turns of this fast mystery thriller.

In The House of Puzzles we are led from the Louvre in Paris to a school camp in the frosty Scottish Highlands and finally on to the Billionaire’s Club ‘House of Puzzles’ in New York. At the school camp in Scotland we reunite with Gerald and his friends Ruby Valentine, Sam Valentine and Felicity Upham. Straight away they are thrown into an intriguing string of dangerous situations and mysterious puzzles.

Will these four friends be able to complete the challenges of the Triple Crown? Can Alex Baranov charm Ruby? Will Sam crack the bizarre code of the Voynich manuscript? Who can save Professor McElderry from the evil Sir Mason Green? Will Gerald and Alex survive a night together inside the Billionaire’s Club House of Puzzles in New York? Will anyone find the infamous perpetual motion machine? Why do so many people want it? And exactly what does the stolen painting- Eugène Delacroix’s Liberty Leading the People have to do with any of this? These are some of the questions that kept me reading this book to the end.

I recommend The House of Puzzles to kids 10+ who like thrilling fast-paced plot-driven stories packed with adventure, intrigue and mystery. The other books in this series are The Billionaire’s Curse, The Emerald Casket, The Mask of Destiny and the Crystal Code.