Is the Arctic a messenger for the rest of the world? 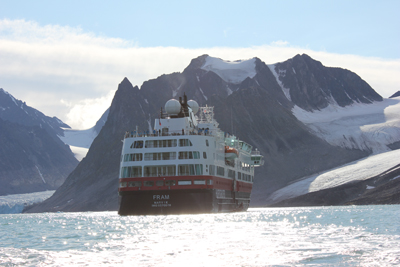 Good question. Look at the top of a world map just above Norway and you’ll see it.

Svalbard is an archipelago in the Arctic Circle. The largest island is called Spitsbergen. The main settlement is called Longyearbyen.

Longyearbyen sits at latitude of 78 degrees North. The equivalent latitude in the Southern Hemisphere would have us standing on Antarctica.

We flew from Oslo to Longyearbyen in August- summer – the time of the midnight sun. Midnight sun in Longyearbyen stretches from 19th April to 23rd August. There is no night. For the five days we were up there it didn’t get dark.

In winter, of course, it is the opposite. From October 26th to Feb 16th it is completely dark covered in snow with temperatures well below zero. That is the time the magical Northern Lights dance in vibrant splashes of colour across the dark sky. That would be good to see.

Svalbard’s populated by miners, international polar researchers, artists, tourist operators and the collection of families that come along with them.

We had a tour of Longyearbyen. It’s a small settlement with supermarket, a few shops, quaint painted houses, a museum, an art gallery, a school and a hospital. Scattered drifts of snow sparkled in the sun, but the roads were clear. Snow sleds and skidoos sat waiting for winter. As did the husky dogs that were huddled in wire cages.

Apparently there is a giant Global Seed Vault a couple of kilometres out of town. Most of the nations of the world have ‘banked’ native seeds there in the permafrost, so crops can be saved in the event of an agricultural disaster.

From Longyearbyen we joined the expedition ship, the MS Fram for a 4 night trip sailing along the northwest coast of Spitsbergen up to Moffen Island that sits on the 80th parallel and then back via Ny Alesund- the northernmost permanently inhabited Arctic Research Station on Earth- then back to Longyearbyen. 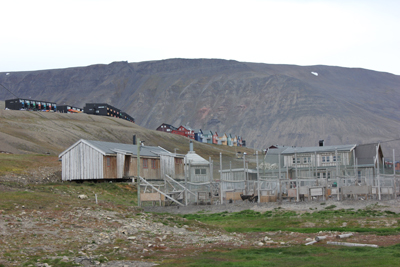 From the comfort of our icebreaker ship we glided smoothly past glacier-carved mountains, fjords, icebergs and scattered, twisted clumps of sea ice – white against the frosty blue sea.

Each day we left the ship in polar circle boats to wander on the rocky shore. We were on the look out for polar bears, reindeers, walruses, seals, arctic foxes and whales.

Unfortunately we only managed to spot one polar bear swimming in the distance. Sadly this caused our guides to panic. The poor polar bears are starving. There is nothing for them to eat. I suppose we looked like tasty morsels.

For a number of reasons, we learned that life in the Arctic is changing. The weather is getting warmer causing the summer sea ice to thin. Now large areas that used to be covered in snow and ice are being replaced by water.

According to the Arctic Monitoring and Assessment Programme, 2005-2010 has been the warmest period ever recorded in the Arctic.

‘Average Arctic Autumn – Winter temperatures are projected to rise by between 3 and 6 degress by 2080, even using the scenarios in which greenhouse gas emissions are projected to be lower than they have for the past ten years’

Arctic scientists have noticed that there has been an increase in surface air temperature in autumn in regions where sea ice has disappeared by the end of summer. This causes the sea to absorb more of the sun’s energy during summer because of the loss of sea ice cover. The extra energy is being released as heat in autumn, further warming the Arctic lower atmosphere.

Is the Arctic a messenger for the rest of the world? Food for thought. Maybe we should all be taking more notice of what’s happening up there.