The Leunig of Paris

In Australia we have Michael Leunig.
Leunig is our cartoonist, philosopher, poet and artist. His sketches reflect our cultural, political and emotional lives. 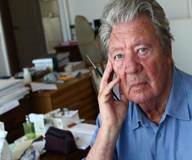 In France they have cartoonist Jean-Jacques Sempé. Over the last sixty years Sempé has drawn thousands of elegant cartoons that cleverly mirror everyday moments in Paris and more recently, in New York.

Sempé’s Paris features imposing buildings with mansard roofs, high windows and wrought iron balconies that dwarf his human characters. He captures familiar moments, showing people going about their lives: walking dogs, helping each other, chatting or just sitting, looking up enjoying the warmth of a strong ray of sun.

Standing on a corner on the Rue de Rivoli, for example, it is possible to position yourself right in the middle of a shaft of afternoon sunlight. The tall buildings cast dull shadows, but the pockets of light can be like bright spots lit from the sky.

It is possible to imagine yourself standing inside a Sempé cartoon. Sometimes Sempé shows this light coming inside as well.
There is one cartoon in a church where a strong shaft is streaming through the window. A lady is asking another woman to move, she can pray in what she has claimed as her own ‘guiding light’ 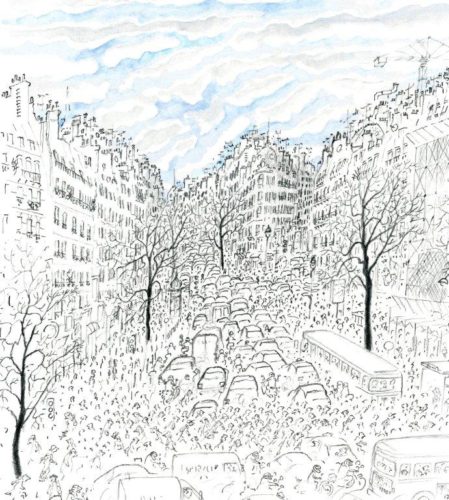 You can notice Sempé moments all over Paris. Think of the traffic crowding the roads as streams of pedestrians flow slowly through the cars and along the footpaths.
You can see this scene depicted in many Sempé cartoons.

There is a gentle wit to Sempé’s humour, funny but never mean. His observations are sharp. He is famous for the way he can capture a feeling of ‘Joie de Vivre’ by drawing a soft smile or a tilt of the head. He can convey confusion, anger or irritation through a quick frown, a thinly drawn mouth or a slightly lifted eye brow. 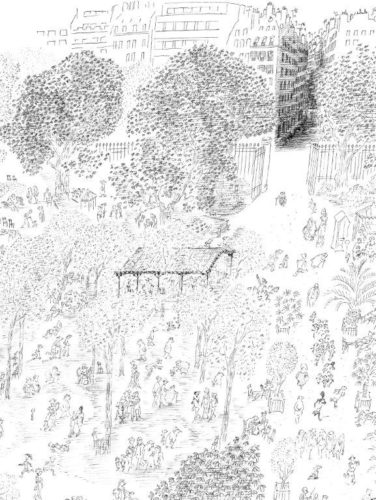 Sempé writes- ‘I draw extremely simple characters. Very simple. But each one needs a detail that makes him different from all the others.’

That can be seen in his sketch of Luxembourg gardens where crowds of people are out enjoying their day. You can observe them on their own, in small groups and as part of the larger group while you can see that each tiny person is different.

Apparently, as a child, Sempé imagined himself growing up to play in Duke Ellington’s orchestra. He quotes Ellington as saying; ‘Jazz is to classical music what cartoons are to painting.’ Sempé agrees. ‘A cartoon isn’t a big statement. Like jazz, it’s about suggestion.’ His cartoons look simple. Often there are no words. Sometimes there is a short caption, but there is always a clever use of suggestion.

Sempé’s characters often ponder the meaning of life.
There is one scene where a rich man and his chauffeur have left their flash car in order to admire the view from a mountain. The caption is: ‘It makes you feel so small.’
Another scene shows a man in red striped swimmers standing at the edge of the ocean staring out to sea.

And then there is this sketch of a Parisian gentleman standing proudly on his balcony with the French flag tattooed on his cheek.

Every one of Sempé’s drawings is a story, a fleeting insight into who we are or what we fear. Despite his French-ness, he manages to touch a universal nerve.

These cartoons can be found in Sempe’s latest book, ‘Sempe- Un Peu De Paris et D’Ailleurs’ ( A touch of Paris and Elsewhere) This collection of his work dates from 1955- 2011 and was collected from his retrospective in Paris 2011. (600 words)