IRIS AND THE TIGER by Leanne Hall 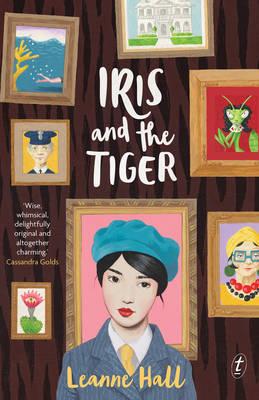 How would you feel if your parents sent you all the way from Melbourne to Spain to secretly spy on your great-aunt because they were plotting to inherit her estate?

This happens to twelve-year-old Iris. She finds herself spending ten days in the mysterious, sprawling Spanish property of ‘Bosque de Nubes’ with her eccentric Aunt Ursula, Seňor Garcia (her driver, Marcel), her gardener, and a maid called Elna.

From the outside, the house looks magnificent- a white two-story mansion with lots of windows, six columns at the front, arches everywhere and ‘waves of plaster along the roof that looked like cake icing.’ But Iris quickly discovers it’s cursed by a strange magic. The walls are dotted with weird ‘Surreal’ paintings. Aunt Ursula’s late brother, James, had been a famous artist.

There is one painting in particular which fascinates Iris. It is called, ‘Iris and the Tiger.’ Iris viewed it in the gallery in Barcelona, but where was this mysterious tiger? Iris befriends Jordi – the gardener’s son- and they embark on a wacky adventure to find the truth behind her uncle’s mysterious paintings and to discover who would ultimately inherit Aunt Ursula’s estate.

On the way they discover magical beasts, ghosts, a five legged shadow hound, a car with feet and some unscrupulous property developers who want to build a theme park on Ursula’s land.

Leanne Hall is a Melbourne author of two YA novels. She won the 2009 Text Prize with her novel, This is Shyness. In 2012 she followed that with a sequel Queen of the Night. Iris and the Tiger is her third novel and her first story for younger readers in the 9 to 12 years age group.

What I particularly liked about this book was that although there are lots of mysterious and impossible things going on, Leanne Hall has managed to ground the story in the real world. She cleverly weaves in information about surrealist art and leads the reader on a quest to discover the truth through the use of her vivid imagination.

The text is complimented beautifully by Sandra Eterovic’s cover art and black and white chapter illustrations.

I recommend Iris and the Tiger to kids who like to escape into mystery stories laced with magical realism.

Teacher notes are available at the Text Publishing website.